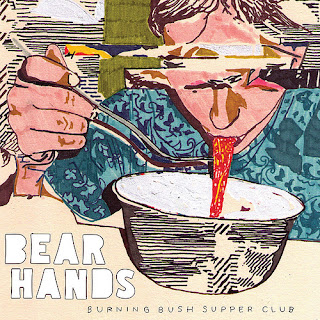 Now here is a band that truly practices what they preach. Dylan Rau, frontman for Bear Hands, sings ‘Everyone knows that crime pays and everybody does it’. I don’t know how ‘everyone’ feels about criminal activity, but it’s quite obvious that Rau has no moral hang-ups when it comes to petty theft.

Rau has done a little more than copy the musical style of past tour-mates MGMT. From the neo-psychedelia and thumping bass to the colorful synths and comedic lyrical wordplay, Bear Hands have essentially made a record that could have been MGMT’s own Congratulations...

Click on the link below to read the rest of my review:

Bear Hands - Golden by TLC Blog
Posted by ryan at 9:05 PM No comments: 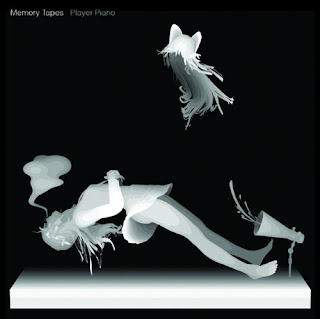 If you were a fan of Memory Tapes’ debut album, Seek Magic, his new LP, Player Piano, may leave you scratching your head. The second record from the New Jersey based musician is a hazy, heady dream world. The Tapes have discarded electronic dance beats in favour of spacey, ethereal melodies and haunting lyrics. At times it’s beautiful, at other times crushingly depressing in its raw honesty. Player Piano reflects on the day-to-day struggle of coming to terms with our shortcomings. It is an album of missed opportunities, regret, happiness and frustration...

Click on the link below to read the rest of my review...

Memory Tapes by antc
Posted by ryan at 10:47 AM No comments: 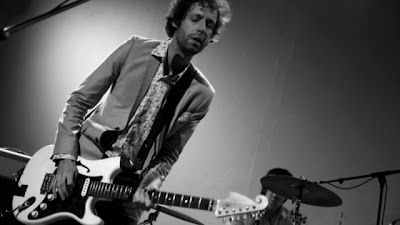 The show opened with Gold Fields, a group of young guys who bounce around on stage like a bunch of Mexican Jumping Beans.  Their moderately known material is nothing to call home about, however their enthusiastic live renditions were infinitely more interesting than their studio recorded counterparts, showing that Gold Fields has some promise.

The kaleidoscopic electropop peddlers that everyone came to see, Melbourne's Miami Horror, took their sweet time taking the stage.  This prompted a few overzealous cheers at the appearance of an overweight sound guy who came to check some of the onstage equipment.

To be completely honest, I was skeptical when the band took the stage.  They all looked slightly pretentious and kind of sleazy, like they had just shown up to some 1970s porno shoot.  I wasn't sold on how their studio sound would transfer to a live setting, especially considering that I had heard that some of their early live shows consisted of nothing but front man Benjamin Plant singing over prerecorded background music.  Surrounded by their expensive synths and nearly tripping over all of the wires running along the floor, the band launched into song after song of danceable indie pop that had everyone on their feet.

Miami Horror played through their set with an infectious energy that quickly spread throughout the crowd of The Gov, which I suppose would be fairly easy when six of the twelve tracks on your debut album have been released as singles.  Even though there wasn't an appearance by Kiwi alt-cutie Kimbra (who performs the vocals on 'I Look To You'), Miami Horror delivered an upbeat performance that truly electrified the crowd.  The show was, in a word, awesome.  I left incredibly impressed and I would assume that everyone in attendance would agree with me if I said that it was $35 well spent.

I did, however, feel somewhat violated during the show, given Plant's penchant for putting his guitar between his legs and thrusting his hips forward in a thinly veiled demonstration of some kind of oversexed junior high school perversion. I don't know if a guitar can be used as compensation for a certain part of male anatomy, but given Plant's proclivities, he should look into acquiring one of these.

Moon Theory by Miami Horror (Official)
Posted by ryan at 9:02 AM No comments: 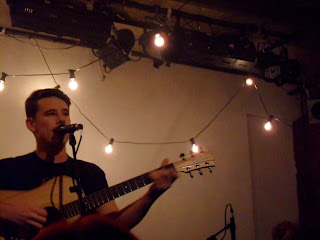 Rip It Up sent me to review this show, however they didn't end up using it, so here it is, better late than never.

A shoulder-to-shoulder, sold-out crowd packed The Gov on Friday, 20th of May as the five members of Boy & Bear took the stage and settled behind their instruments.  Incandescent light bulbs were strung above while little lamps salvaged from garage sales adorned the stage, setting the mood for an intimate and powerful performance.
Boy & Bear have garnered attention due to their captivating vocal harmonies and memorable melodies, and seeing them live is not only a treat for the ears but the eyes as well.  They perform together like a consistent and concise well-oiled machine, easily capturing the essence of their studio recordings. This isn’t to say that the band simply slides into their comfort zone and plays their songs in a mechanical or rigid fashion.  The sold-out crowd was treated to extended guitar solos and an incredibly energetic performance, prompting them to sing-along while waving their hands in the air.

Boy & Bear’s set consisted of many fan-favourites including “Blood To Gold” and “Mexican Mavis”. However, it was the song that secured them the number five spot on this year’s Hottest 100 that incited the biggest reaction.  Their cover of Crowded House’s “Fall At Your Feet” was an exceptionally potent experience, with the chugging beats of drummer Tim Hart levying palpable emotion.
The band’s new material lulled concertgoers into a sleepy shuffle, although a few eccentric diehards tried their best to clap along.  Despite these slight missteps, Boy & Bear always managed to get the crowd’s collective pulse beating again with their folksy brand of country balladry and indie rock.
Late in their set vocalist Dave Hosking announced to the crowd that although he “probably shouldn’t be saying this”, the sold-out Adelaide crowd was the best they’ve had so far.  To be fair, when a show is as good as it was on Friday night, the band deserves it. 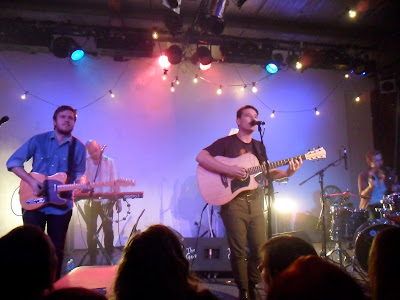 Boy & Bear - "Mexican Mavis" by theaudioperv
Posted by ryan at 1:52 AM No comments: The first single off Eureka from Mother Mother, The Stand, is one of the most dizzying and laugh out loud funny songs I’ve heard in a long time.  The co-ed vocal ping-pong that has become Mother Mother’s staple is better than ever, and it’s damn catchy. The Stand is bouncy, jaunty and unwavering in its candy-coated presentation, setting a precedent that the rest of the album more or less follows. It even ends with a little giggle to let you know that it was a light-hearted, playful affair in case you didn’t already get that from the swirling organs and silly lyrics...

Click on the link below to read the rest of my review:

EUREKA by Mother Mother
Posted by ryan at 1:05 AM No comments: